Summer is really winding down. My boys go back to school right after Labor Day.

This is a big year for us: our little Hippo is starting school for the first time! He’ll be in preschool three mornings a week. And so it’s time to make a German Schultütte!!

The Schultütte is a wonderful German tradition for the first day of school. It’s a large, colorful cone filled with all kinds of goodies to celebrate that big day. You can put whatever you like into it. Maybe school supplies, stickers, a small toy, candy, or whatever your little one is into! 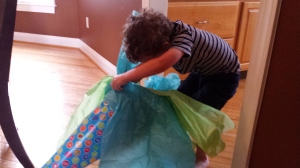 I can’t remember exactly what we put in the Schultütte. Probably some crayons, pencils, erasers, stickers. I think there were some magnetic letters, a balloon, a maze book, and a small Lego toy, too.

This year, I thought I would enlist Froggy’s help in filling the Schultütte for Hippo. I plan to take him to Target next week and see what we can find. The red dot section is especially good for finding those small, inexpensive treats. The Dollar Store would be a good idea, too. We already picked out a small Lego toy for him: it’s a “Bagger” – one of his favorite things to spot while we’re out driving. And yes, he always says it in German  🙂

I found a great blog post with instructions on making the Schultütte and use it again and again each year. It only takes about 20-30 minutes. And you need just a few supplies – perhaps you already have them in the house: poster board, wrapping paper, tissue paper, tape/glue/staples, scissors, and of course the goodies to put in the Schultütte! The first part of cutting the poster board is a bit tricky until you start to do it  🙂 Check out the comments on the post for a few more tips.

Hippo got his first Schultütte the day before school started. It was such a hit!

It was almost as big as he is! I was even able to reuse last year’s from Froggy 🙂  Just put on fresh tissue paper! Inside, he found crayons, pencils, colored pencils, a pencil case, glue stick, child scissors, stickers, car, toothbrush, dinosaur workbook, bouncy ball, and a small Lego “Bagger”. Lots of fun!

One thought on “Back to School Traditions: Schultütte”

The uplifting essence of multi-talented author, artist, musician, and former teacher @patsiemccandless is captured in this article in VIE Magazin. Please read, enjoy, and share!
Helau! Alaaf! These masks made by my students in grades 3 - 6 brighten up our wintery days with all that color!
More drawings from my students in grades 1-4. After a story, they drew a dog with me. I think they did a great job! 😄
Fröhliche Weihnachten!
Loading Comments...
Comment
×
%d bloggers like this: