This lovely story about how the apple got its star come from the Waldorf schools. You can read the original English here.

The story tells about a little seed that is sleeping in the earth until one morning it is awakened by Mother (or Father) Sun. After it pokes its head up out of the soil, it is enchanted by all the sights of nature that surround him. That night, he sees the dark sky full of stars and wishes to have one for himself. A fairy visits him and tells him that he will have his wish granted if he works hard to grow strong and fill himself with love. Eventually the seed becomes a tree with little buds, and the tree becomes a father/mother to the little pink buds. He takes such loving care of them and is so happy, that he forgets all about his wish to have a star. When the fairy returns, the tree is full of red apples, and he tells the fairy that he no longer needs a star of his own. So she declares that she will hide a star inside each apple for the little children to find.

After we read the story, I cut open an apple for the children to see the star. I think that was the best part 🙂  I’m not sure how many of the children had ever seen the star inside of the apple. The trick is to cut it through the “equator” – not from stem to bottom. Makes it trickier to cut up for eating, but it does reveal the magic!

As it turns out, this story was rather challenging. It was a little long and a little too hard for my beginners to understand. I think in the future, I will either save this for a second-year lesson or simplify it some more.

Because it was challenging for my 3rd & 4th-graders, I decided not to tell this story to my 1st & 2nd-graders. I told them the somewhat creepy Halloween-time story of the green ribbon instead….

This story is available on the Great Story Reading Project 🙂

In story hour yesterday, we celebrated fall with numbers and colors!

We read the following books: 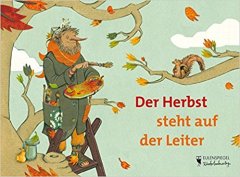 And we sang the following songs:

Then we did two activities:

The children were given a tree with numbers on it along with 10 foam leaves, also with numbers on each. With help from their mom or caregiver, the children matched the numbers from the stickers with those on the tree and stuck them in the appropriate place. Download the PDF activity here: zehn-blatter-arbeitsblatt-gita 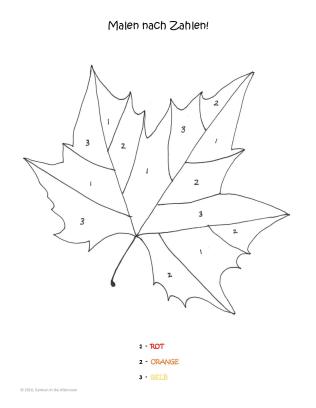 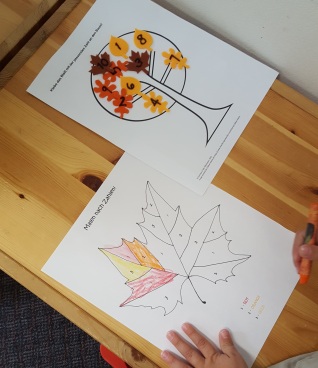 The older children only needed a little bit of help. And our younger friends enjoyed making their leaves extra colorful!

It’s that time of year! The leaves are turning fiery colors. The air is getting crisp. And it’s time to visit the pumpkin patch! We started the tradition 3 years ago. Our local patch is only about 10 minutes from our house. We can go on a hay ride or pull a Radio Flyer wagon out to the pumpkins. The boys always enjoy being pulled out to the pumpkin patch in the wagon.

We got some small pumpkins this year in addition to the bigger ones we would carve. So Hippo and I got out the paints and started decorating. We used circle-shaped sponge brushes in different sizes to start applying paint. Perfect opportunity to talk about shapes! Hippo started out by making a pattern. I was so impressed! But then he just couldn’t stop himself. So it turned into a lovely blue-green pumpkin. That’s okay, though. It’s the boys’ favorite color!

So our little activity allowed us to talk about fall, pumpkins, shapes, and colors.

With Columbus Day coming up, we were going to miss our first October meeting of Story Hour. So we snuck in an extra session on the last Friday of September. Perfect timing, since fall has just begun!

We started out by reviewing numbers. I just grabbed the blocks from the play area to go over numbers 1-10. For the first book (Zehn Blätter fliegen davon), I had put sticky notes on each page to count the leaves that had flown from the tree. That way, the children had the chance to review the numbers again. At the end of the story hour, we did two activities to practice numbers.

All of these songs are available to download through Amazon.de!

1. Klebe das Blatt mit der passenden Zahl an den Baum. In addition to the handout, I used foam leaf stickers. I wrote a number on each one (1 – 10), and the children had to match the leaf sticker to the number on the tree. Download the PDF here: zehn-blatter-arbeitsblatt-gita