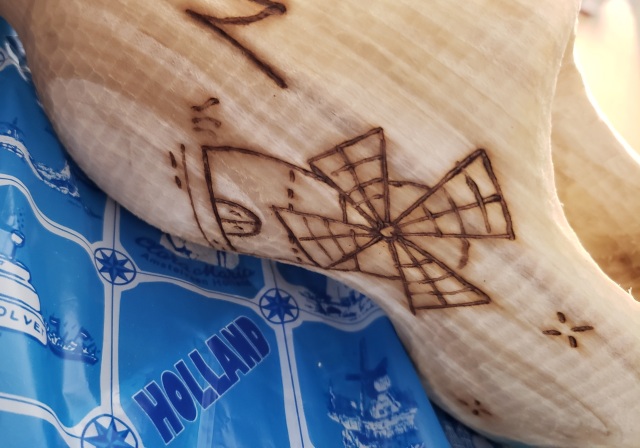 Today was one of the most fun experiences we’ve had!! We returned to Clara Maria, the dairy farm and clog factory in Amstelveen. When we were there last year, we got to see a demonstration of someone making a wooden shoe. That was pretty cool.

But today, Hippo actually GOT TO MAKE HIS OWN SHOE!!! It was so exciting! 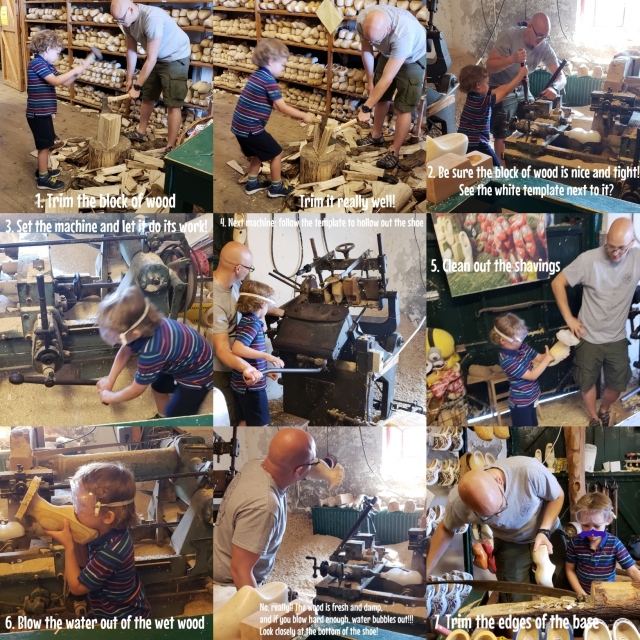 First he hammered the ax into the block of wood to trim it down to the right size. Then they put the block of wood in place. The machine works automatically from a template to create the outside shape of the shoe. Then it gets moved to the next machine to hollow out the shoe. This machine also works from a template, but you have to do it manually. It left behind a lot of shavings, so those had to be cleaned out, too.

The wood at the top of the shoe is left in place, so it can stand up. After that was trimmed down a bit, we took it in to be engraved. He chose to have his name and a windmill on it.

I have been to Clara Maria at least a half dozen times over the years. I’ve seen the shoes being made. But I’ve never seem them let a child make one! We didn’t even ask for it. We thought we were just going to get a demonstration.

And to top it all off, we got to keep the shoe for free! I was ready to pay for it, but no. They said we could have it.

Well, we ended up buying an awful lot of cheese to bring home 🙂  It’s seriously the best cheese I’ve ever had. All different kinds of Gouda cheese. And they make a mustard dill sauce to go with it that is deeeeelicious!

So if you happen to go through Amstelveen (not far from Amsterdam), definitely stop by Clara Maria. You never know what will happen!