We’re back! It’s been well over a year since we last flew to the Netherlands. But this year we decided not to go in the summer, but to wait until the week of Thanksgiving … and the first week in December … to return to the Netherlands. It feels like a long time since we’ve been here, and it’s great to be back!

The flight over was uneventful, which is good! As usual, I only sleep for about an hour. But both kids did much better! It’s hard to sleep when the lights are on and food is being served. And then when they turn out the lights, there are so many screens flashing, I can’t keep my eyes closed. How do you avoid suffering from jetlag??

Even with 6 hours of sleep, it’s hard to stay on your feet while waiting for the rental car!

Our flight left about three hours later than our summer flights usually do. Leaving after 9 pm meant the kids were up well past their bedtime, but maybe that helped them fall asleep? I liked landing later. We arrived around 11 am. So even though my head was nodding at times, I actually stayed up until after 8 pm! I’ve never made it through the first day without a nap!

We drove straight to Oma & Opa’s. We were all hungry, so Oma had some food ready for us. And what did Hippo get for his first meal? 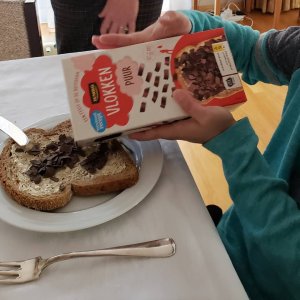 Chocolate “vlokken” – or flakes – of course! You put them on buttered bread (the butter makes them stick).

The rest of the day was rather uneventful. After visiting with Oma & Opa, we settled in to our rental house. It’s fun to live the way the Dutch do while we’re here!

The kids made it to their normal bedtime, around 8. They were up at 4 am until we told them to go back to sleep! Then Froggy slept until 9, but Hippo had to be woken up at 11!

Today has been a quiet day. We went to the shops and got some food to stock the kitchen. It was fun to see some of the things for Sinterklaas!

I’m so excited to be here during the holidays!! I’m not sure how much there will be to do, but I’ll post what I can here! I know that we will be seeing Sinterklaas at Muiderslot Castle. And we will go to a Christmas Market in Aachen. I can hardly wait!!

My 3/4s studied the alphabet this year, so on our last class, we had a Buchstabenparty! Of course, you can't find German letters here, so I bought sugar cookies and piped all 30 letters. They had to ask for a letter to get a cookie 😉🍪
All of my German students were learning about Die kleine Raupe Nimmersatt - from age 3 to 12! So each class contributed to a different part of our bulletin board. 🐛🦋 My older students also learned about the fascinating life of Eric Carle and why he's so connected to Germany! 🇩🇪
The uplifting essence of multi-talented author, artist, musician, and former teacher @patsiemccandless is captured in this article in VIE Magazin. Please read, enjoy, and share!
Helau! Alaaf! These masks made by my students in grades 3 - 6 brighten up our wintery days with all that color!
Loading Comments...
%d bloggers like this: