My 6-year-old is really into space these days! The other day, he found some German Memory cards in my office and wanted to play. He really enjoyed it 🙂  So I decided to make a space-themed German Memory game. 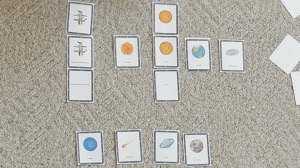 There are three kinds of cards included:

You can mix and match them however you like!

I created the images in full-sized 8 1/2 x 11 sheets, so you can use them for posters. Or just print 4 or 6 to a page to created smaller cards.