What a whirlwind it’s been since school ended! Just the week before the last day, Froggy broke his arm! He’s been amazing, actually. After the initial pain wore off, he was such a trooper! And he’s hardly complained a bit about being in a full arm cast. Luckily, it only hast to be on for 3 weeks. Then hopefully we’ll move on to something a little easier….

In the meantime, that meant no swim lessons! And I decided not to sign him up for any camps, since I didn’t want him overdoing it. What to do instead?!

Well, I made up a kind of guide for our week. There are a few things to be checked off each day. And then I made three more lists: things to do at home/inside, outdoor activities, and outings. I posted those on our cork board in the kitchen. No excuses for being bored around here! (Before I wrote them out, I went over them with Froggy to see if there was anything he absolutely was not interested in.) 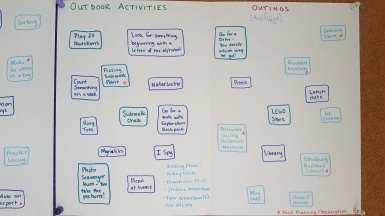 Beneath the lists is our Wochenplan. In addition to that, I made up a reading log, so he can keep track of what he reads each day, for how long, and who does the reading (in prep for 1st grade, the teachers asked the children to read 10 minutes per day, but it didn’t matter if the child read or was read to).

You may notice that the books on the list are either in German or Dutch! We are trying an experiment I read about on someone’s blog: no English books for the summer!!! By the last day of school, I had packed up all the English books. There has been a bit of grumbling from Froggy, but he’s going along with it. Hippo doesn’t seem to mind at all. The only exception is that I left out a few books about Germany and the Netherlands, since we’ll be heading over there for two weeks this summer. So far, we are seeing improvement in Froggy’s reading and pronunciation!

Any questions or ideas to add? I’d love to read your comments!