We arrived yesterday at the house in Huizen. The kids were eager to explore the rental and see where they would sleep. PER went to get some groceries, while the kids and I found a game to play. Then Oma & Opa came over. And a little while later, our au pair from last year (AP2 from Austria) arrived to spend the first week with us! We just ordered pizza for dinner, and we enjoyed settling in.

So today was our first official day. The kids were happy to have their special breakfast that they only get to eat in the Netherlands: bread with Nutella 🙂  There is a ping-pong table downstairs that the boys have been enjoying – having never played before!

Around noon, we headed in to Huizen. It’s a quaint little Dutch town with small houses and narrow streets. First, we walked to a snack bar for lunch: hamburger, chicken nuggets, french fries, and for the brave (or the Europeans) kroket – a kind of minced meat that is breaded and fried and eaten on a roll with mustard. I didn’t care for it when I first tried it, but if I can put ketchup on it instead of mustard, I don’t mind it — but that is a horrifying idea to any Dutchie!

Then we walked back through the town to a toy store called Intertoys. They boys each had their allowance to spend on some new things while we are here for the month. (I’m terrible about paying them regularly, but I always keep track of the last time I paid them. Um… it was early March! So they had saved up quite a lot!) The store was a little small, but the kids managed to find plenty of things they wanted. With some gentle directing, they chose some toys that should last the month: a box of LEGOs, a domino marble run, and a game called Pisa in which you take turns adding tourists to different levels, trying not to let the tower fall over! 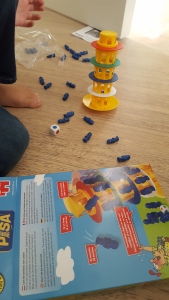 From there, we went to the Albert Hijn to get some groceries. We wanted to let the boys pick out some things they thought they might like. Froggy (age 7) has been getting so much better about trying new things. He’s even ready to try some fruits and vegetables! Thank goodness! They have a favorite wheat cracker we always get, along with some pretzels for snacks.

Later in the evening we went back to Huizen for pannenkoeken – Dutch pancakes – at Pannenkoeken restaurant Dickens. They are as large as a plate and much thinner than our American pancakes. And one is usually enough! The boys like to get it with Nutella and roll it up to eat it. I like mine with strawberries and cream. It’s kind of like eating dessert for dinner! But you can also get savory, like ham and cheese. There was also a small playground outside where the kids could play afterward or even while you wait for your food. The restaurant was right near a canal, and it was picturesque: 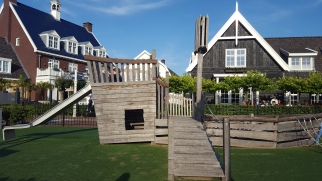 Glücksschweinepfannkuchen for dinner and poffertjes for breakfast! How to ring in the new year!! 🎉
We got quite a treat tonight! Fireworks seen right from our bedroom window!! 🎆 We had some fun playing with slow-motion and hyperlapse functions 😁 Einen guten Rutsch ins neue Jahr! 😘
We turned our Christmas tree into a New Year's tree! 🌲🎉
Homemade pepernoten! We made them to bring to a school traditions party, and they were a big hit! Not quite like the ones you buy in the store. But pretty yummy. And oh so easy! #dutchkids #dutchtravels #dutchholidays #pepernoten #homemadefood #germanintheafternoonactivities
%d bloggers like this: