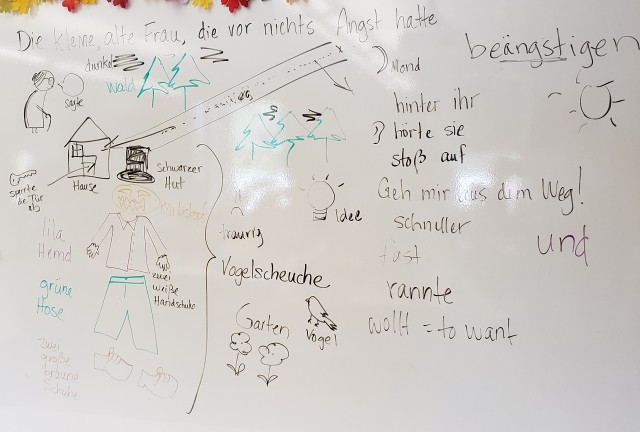 I’m not a fan of scary stories. And the last thing I want to do is frighten a child, even at Halloween! But I still wanted to tell a good story with a Halloween theme. So I found the book The Little Old Lady Who Was Not Afraid of Anything by Linda Williams.

The little old lady is followed home by two shoes, a pair of pants, a shirt, gloves, a hat, and a scary jack-o-lantern. But when they don’t frighten her, they get sad. But she has an idea! The next day, she wakes up to see them all standing in her garden making the perfect scarecrow!

This story is perfect for Story Listening, because of the way it repeats. The ending was a little tricky to make clear, though. I’ll have to work on that for next time.

In 3rd & 4th grade, I’m teaching in a different room, so I now have a white board instead of a chalk board. The pictures don’t come out quite as well 🙂

I tried something new with this lesson. I gave the children a sheet of paper with some of the words on it, so they could draw along with me. My intention was for them to be more attentive in their listening. But I don’t think it worked very well. They were too concerned with their drawings. I saw more of the tops of their heads than their eyes! It was a good experiment. Maybe I’ll try having them draw after the story another time.

I simplified the story even more for the younger children. I took out the gloves and hat and also removed some of the descriptive colors of the clothes. It made the story go a little faster, since I don’t have as much time to spend with them.

All of my German students were learning about Die kleine Raupe Nimmersatt - from age 3 to 12! So each class contributed to a different part of our bulletin board. 🐛🦋 My older students also learned about the fascinating life of Eric Carle and why he's so connected to Germany! 🇩🇪
The uplifting essence of multi-talented author, artist, musician, and former teacher @patsiemccandless is captured in this article in VIE Magazin. Please read, enjoy, and share!
Helau! Alaaf! These masks made by my students in grades 3 - 6 brighten up our wintery days with all that color!
More drawings from my students in grades 1-4. After a story, they drew a dog with me. I think they did a great job! 😄
Loading Comments...
Comment
×
%d bloggers like this: