Froggy has been enjoying our German dates so much, he wanted to do more! So we decided that he would go on another date this week with AP2. Of course, he wanted to keep talking about space. I just happened to have ordered some space workbooks in German, and they arrived Thursday afternoon. He’s really into sticker workbooks right now, so he was VERY excited 🙂

He worked through 4 or 5 pages of the book. Hippo and I happened to crash their date at the last minute, so I got to see some of it in action 🙂  AP2 was doing a lot of the reading, but then we got Froggy to read out loud, too. The workbook provided some good challenge with a number of words that he didn’t know.

The workbook we used is called Mitmach-Heft Weltraum (Was ist was Junior) (Tessloff, 2016). I bought it on Amazon.de for about €5. 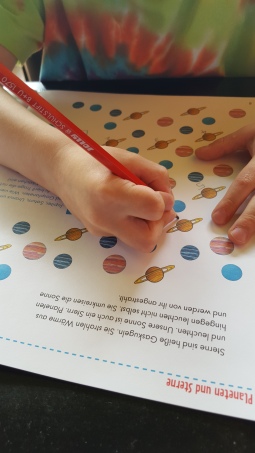