I have been organizing some of my letter materials, now that we’re three weeks into our Buchstaben work.

A few years ago, I splurged on a large set of capital letters. They are actually lacing letters by Learning Resources, but they are nice and sturdy, and you hardly notice the holes. Today, I put them into a craft box that has 32 compartments (purchased at a craft store). More than the 26 I needed, but that’s okay! Now if only I had a way to get letters with umlauts….??? 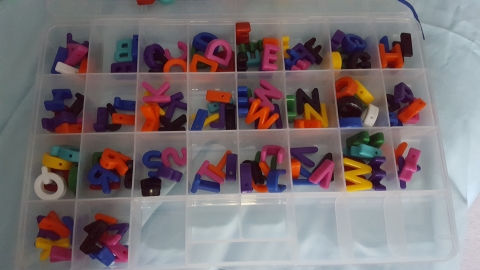 I have another fun little storage unit that I keep stickers in. Sometimes, the boys just like to play with stickers. It’s super simple. But this way, I can just grab the letters I need. I got the small storage unit online, but you can get them at the hardware store. Then I just stuck alphabet stickers on each little drawer. Easy peasy! 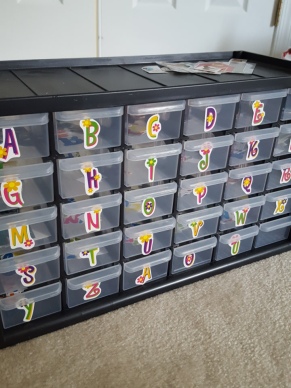 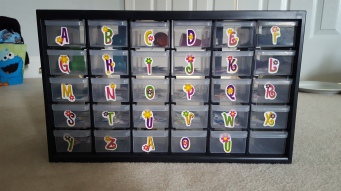 It takes some time to cut up letter stickers, but I just do it while I’m watching TV. Or like today, as I rested in bed with a cold 😦

Today, I grabbed some stickers to play with before Hippo’s nap. Now that we’re three weeks in, I also figured I could work with all three letters: B, P, M.  Only my foggy brain got a little confused, and I grabbed a pear for P instead of B (Birne). Oh well!

I use a sketch book for our letter work. The pages are nice and thick, and they are blank. It costs more than, say, a composition notebook, but I figure it will hold up better. You can see (kind of) that I wrote the letter M at the top of the page and then how Hippo put the M letter stickers on the sides of it. I wrote “OBST” and then the three letters. I tried not to say the letter names, but just the letter sounds. He would say the word, and I would repeat it, emphasizing the first sound.

Fast, easy, and most importantly FUN!

One thought on “Letters Everywhere”

My 3/4s studied the alphabet this year, so on our last class, we had a Buchstabenparty! Of course, you can't find German letters here, so I bought sugar cookies and piped all 30 letters. They had to ask for a letter to get a cookie 😉🍪
All of my German students were learning about Die kleine Raupe Nimmersatt - from age 3 to 12! So each class contributed to a different part of our bulletin board. 🐛🦋 My older students also learned about the fascinating life of Eric Carle and why he's so connected to Germany! 🇩🇪
The uplifting essence of multi-talented author, artist, musician, and former teacher @patsiemccandless is captured in this article in VIE Magazin. Please read, enjoy, and share!
Helau! Alaaf! These masks made by my students in grades 3 - 6 brighten up our wintery days with all that color!
Loading Comments...
%d bloggers like this: