As I mentioned in a recent post, I love teaching about Martinstag, because it embodies the spirit of giving and selflessness. In the past, I’ve taught about Martin in the German story hour and in the pre-k/kindergarten class. This year I finally got to bring it into the 1st and 2nd grade class. Each class is a little bit different. In this post I’ll tell you about what we do …

This is a mixed class of 22 students. I couldn’t just jump right in with books and songs, like I did in Story Hour. Instead, I started with the story of Sterntaler. The children were outraged that the poor girl was all alone! And then shocked when she kept giving everything away! They were right with me the whole time 🙂  My board looked a little different, since they needed more help to understand it. But they had also experienced the method the week before when I told them Goldilocks. Here is a picture of my finished board for Sterntaler: 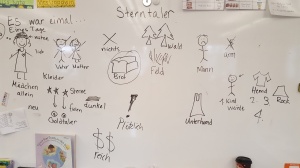 After that, I read them the story of Martin, using the book Das erste Buch von Sankt Martin by Erwin Grosche (Gabriel Verlag, 2017). I used the book mainly for the illustrations and wrote out the story in English beforehand. I knew after hearing Sterntaler, that was probably enough German for that class (especially since it was 2pm on a Friday … the week of Halloween!).

Next I wanted to teach them the song, “Laterne, Laterne“. The beginning is so simple with its four words: Laterne, Sonne, Mond, Sterne. I knew they would need a little movement by this time, though, so I came up with a little game. I had printed out the vocab words on small cards. I printed enough so that each child could have a card. I just used my full-sized word posters and printed them 4-to-a-page. Then I laminated them and cut them down to size. 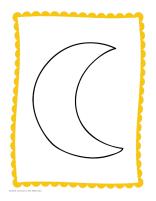 I handed the cards out to the children and then had them get into groups according to the picture – in order, of course! I had already gone over the words using my full-sized word posters. So they were familiar enough with the vocab. I called out a word, and that group had to raise their picture and say the word. I mixed them up and first. Then I told them to pay attention, because we were going to speed it up! And I went in order according to the song: Laterne! Laterne! Sonne! Mond! Sterne! They enjoyed the little game. And weren’t they surprised when I told them they had just learned the beginning of a song?!

Finally, it was time to make our lanterns! We did them a little differently in this older class. Although in hindsight, I’m not sure I would do it this way again!

The lanterns turned out alright in the end. But it took so long that we did not have time to parade in the halls.

Then again, it was the last hour of school on a Friday. And did I mention it was Halloween week?? Scary stuff!! 🙂

Tutorial and templates can be found in the post Martinstag Lanterns!

One thought on “Martinstag in the Classroom: Part 2”